Founded in 2005 within the ESO Group, ESO Industrial Automation is one of the leading companies in the industrial automation industry. Specializing in automation processes for tire production, the company has become a solution partner for investors in other sectors, enjoying steady growth. At its production facility in Kocaeli, ESO Industrial Automation is engaged in the business of machine automation, factory production process automation, design, projecting, implementation, commissioning and after-sales service. The company has also proven itself to be a reliable solution partner for customers in the contracting projects for panel design, panel assembly, electrical general maintenance and cabling. ESO Industrial Automation is the exclusive distributor for Turkey of German Laser & Med Industrial Laser Products and Fara Led Lamb products, and is also the distributor for Kocaeli of Mitsubishi Electric, Festo, Elimko, Turck and Lapp Group products.

ESO Industrial Automation is member of ESO Group, with its sister company Erdemtaş Machinery Corporation on factory installation projects on a turnkey basis. While Erdemtaş is responsible for machine design, production and mechanical installation of the system, ESO Industrial undertakes the automation installation, electrical wiring and panel manufacturing of the system. The systems are delivered to the customers after the assembly works on the field are completed using the company’s own machinery, cranes and platforms and the systems become operational. Thanks to the strong spirit of cooperation and constructive rapport under the corporate roof of ESO, customers enjoy the benefits of smooth-running and seamlessly managed project processes whereby they engage with a single company ensuring efficient allocation of time and resources for quality products and services and reduced costs as far as turnkey factory installation projects are concerned.

Enjoying an accelerated growth on the backdrop of its extensive know-how and industry experience, ESO Industrial Automation has been launching various projects not only in the Turkish market but also in the African and European countries. We are concentrating our efforts on continuing our overseas expansion.

Located in a key position where the East meets the West, ESO Industrial, as a leading company, will continue to deliver the best results on the strength of its strong mission statement, vision and values while prioritizing customer satisfaction, quality, safety and environmental issues.

As a customer-focused company respecting the rule of law, our goal is to constantly improve our excellent products and services. Among several of our priorities are timely completion of projects with minimum cost, the protection of the environment and the upholding of occupational health and safety procedures. Our company objectives are centered around creating value for our employees, the society as a whole and our shareholders.
.

Delivering maximum customer satisfaction as a dependable solution partner and making a difference in the industry by investing in the latest technologies to ensure high-quality services are delivered.

ESO Industrial Automation was established in 2005 in the Izmit district of Kocaeli to provide services in relation to the establishment of industrial automation systems, especially for the tire industry, as well as electrical contracting services and machine manufacturing as a reliable solution partner.

Having entered the market as a provider of electrical contracting services, ESO Industrial Automation expanded its commercial operations in the same year after obtaining the distributorship of factory automation products produced by Mitsubishi Electric, temperature and pressure measurement systems produced by Elimko companies as well as becoming the official distributor of the Laser Med Industrial Laser Company.

The company’s industrial automation division became operational in 2006. Redeploying its founder’s experience of 35 years in the tire industry into further development of the same industry, ESO Industrial Automation started offering its services in automation, electricity and mechanics under the umbrella of the ESO Group following the establishment of Erdemtaş in 2007. Our unique business approach which represents a crucial milestone in the industry in terms of the adoption of a holistic approach on the installation of mechanical as well as electrical and automation systems is a second to none business model, offering efficient solutions for speedy completion of turnkey projects, which in turn gives us a strong competitive edge. The ESO Group has also built a design and research and development team composed of electrical, electronic and mechanical engineers and set up a new production facility. Capable of carefully analyzing customer needs and converting them into deliverables, designing and manufacturing products and creating new software to run the systems commissioned by customers, our team of engineers works with a customer-oriented approach for the best results.
In 2010, ESO Industrial Automation was awarded the ISO 9001 Quality Management System certificate and the CE certificate as a testament to its manufacturing processes to European Standards.

Having achieved great success in the domestic markets, ESO Industrial Automation started its overseas expansion by dismantling the factories of global tire brands located abroad and seamlessly performing the installation and commissioning operations in Turkey.

Obtaining the dealership in 2012 of Festo, a company with globally leading automation technologies, Industrial Automation continued its growth by hitting a new milestone in the fields of sales and marketing. Expanding its team of engineers in the same year, the company established a sales office at a different location in Izmit.

The fact that ESO Industrial Automation, which gained global popularity in the process, by realizing the turnkey factory installation of a giant Japanese tire brand that had decided to invest in Turkey in 2014, was another important milestone, opening up the turnkey factory installation line. Settlement areas were established in the Aksaray, Çankırı and Kırşehir districts for the teams working on ongoing turnkey projects in Central Anatolia.

Taking its strength from its customer satisfaction oriented approach, the company takes quick but cautious steps towards growth, joining in 2016 a new factory project for a tire brand with investments across different parts of Turkey. In the same year, the company undertook the dealership of Lapp Group, a globally renowned brand which has been producing cables for different industries and markets for 60 years, as well as that of Leuze Electronic, another world brand manufacturing sensor solutions for industrial automation systems.

ESO Industrial Automation continues its overseas expansion with complete disassembly of the factory of a brand operating in Turkey and its installation in Turkey, and also focuses on its growth in the domestic markets through rapid strides towards becoming more corporate.
Currently, the ESO Group has a team of 145 specialists who execute company projects both home and abroad. Sustainability is successfully applied across the entire company as a cherished concept.

The company continues its streak of success that it has maintained ever since its incorporation. With its vision for continuous improvement, ESO Industrial Automation aims to transfer its experiences in the tire and automotive sectors to different sectors with a more corporate mentality. 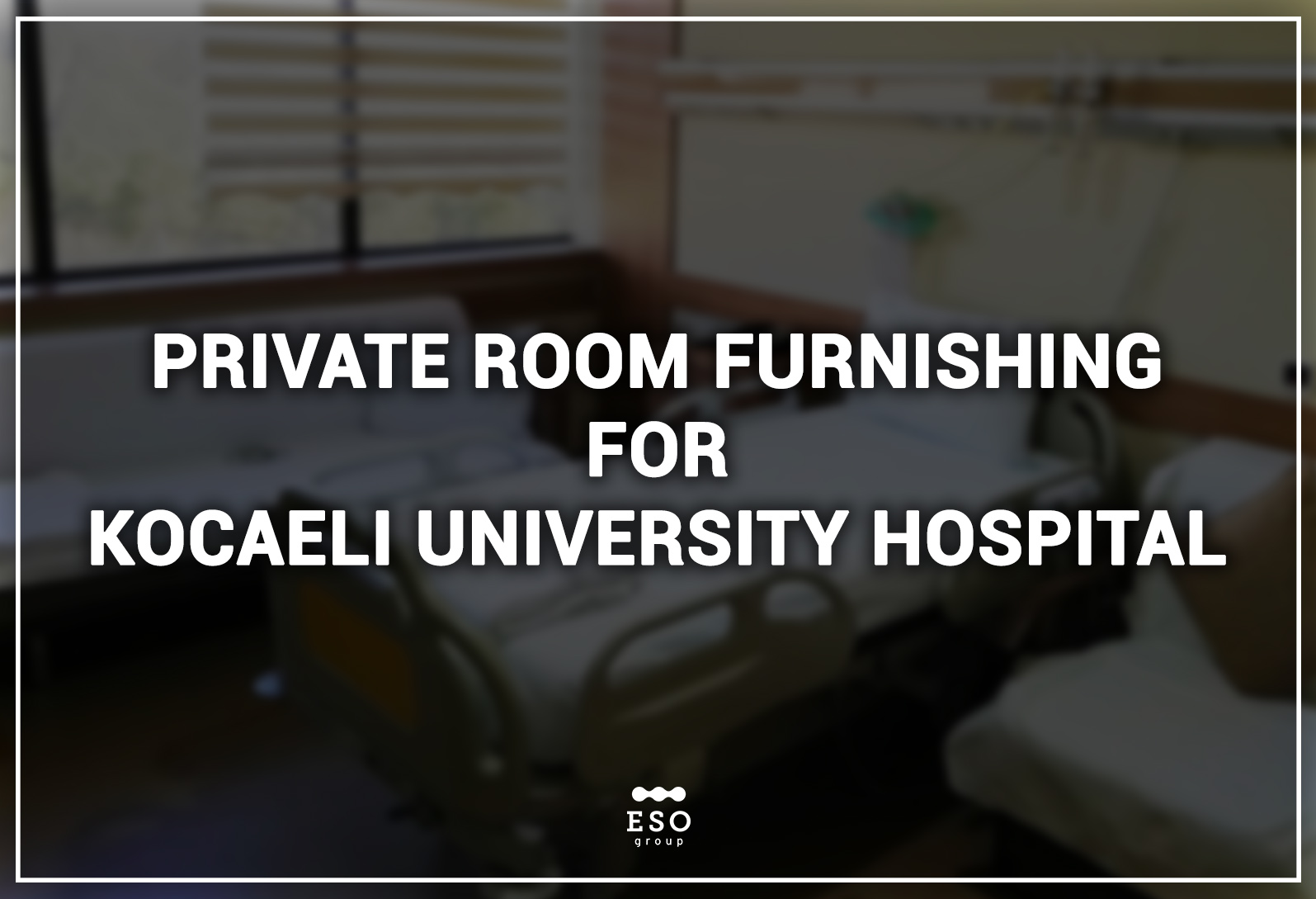 Aid Bridge from Izmit to Siirt 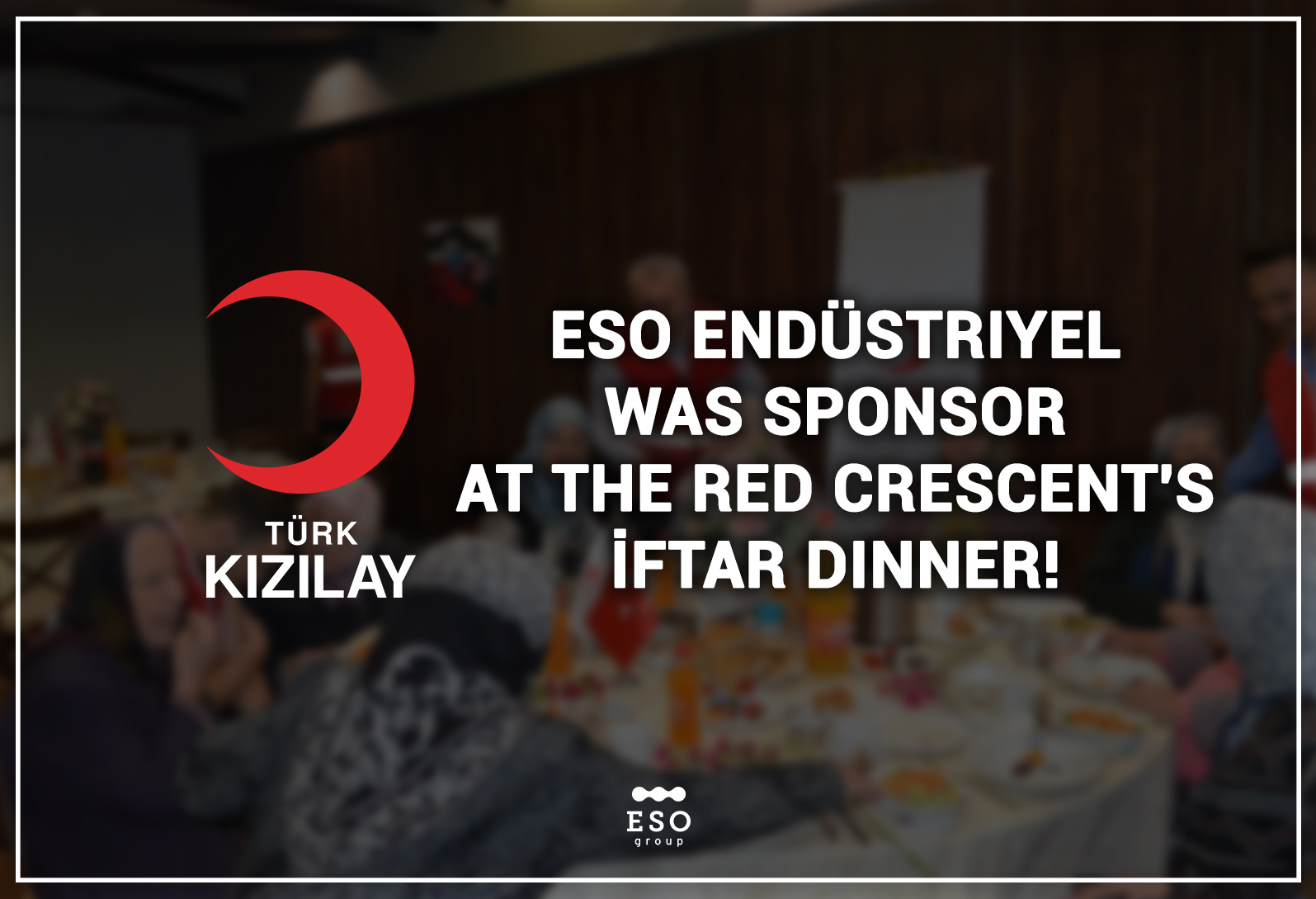 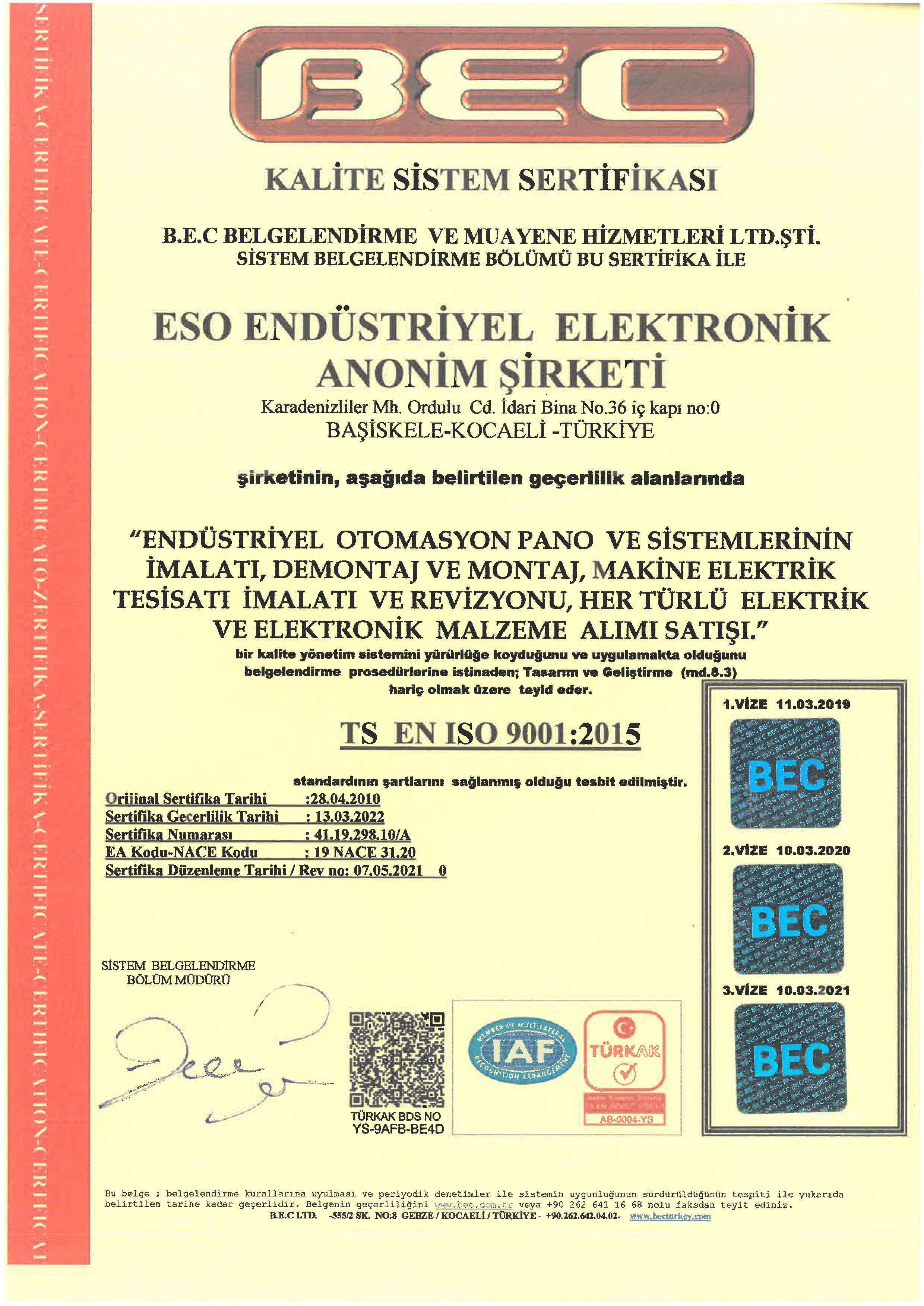 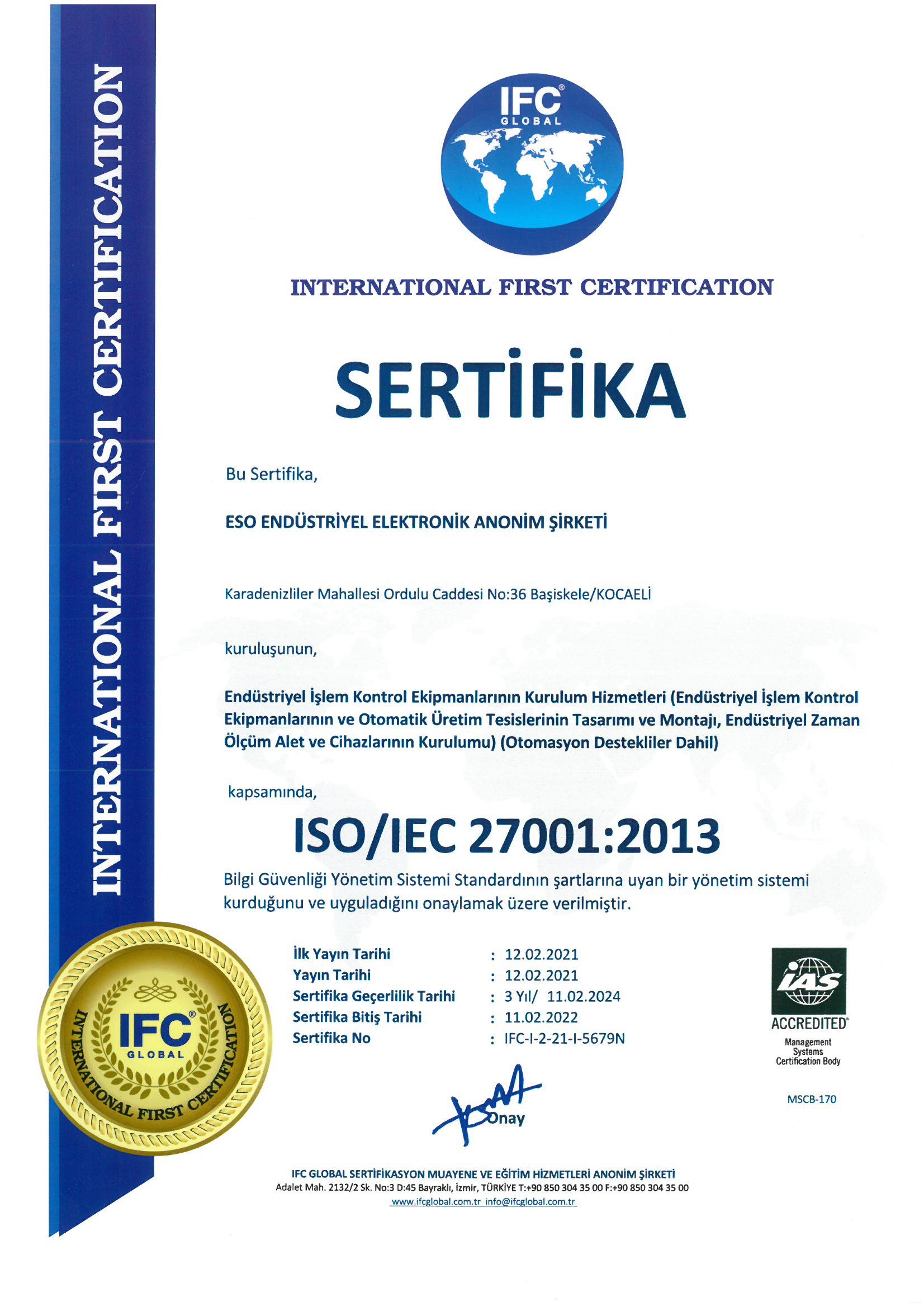 One of the leading companies in the industrial automation industry specializing in automation processes for vehicle tire production, ESO Industrial Automation is engaged in the business of machine automation, factory production process automation, design, projecting, implementation, commissioning and after-sales service. The company has also proven itself to be a reliable solution partner for customers in the contracting projects for panel design, panel assembly, electrical general maintenance and cabling. While continuing its activities, ESO Industrial Automation considers the following as inseparable elements of its Quality Policy:

ESO Industrial Automation operates a business model that cares about the environment and the health and safety of its employees. Accordingly, the company makes the following commitments: